Ticketing on VRE is also troublesome if you are not a regular user of the service or the holder of a North American credit card. The only possible way to cover all VRE services during the day is to concentrate on the stations of Alexandria, Crystal City, LĺEnfant Plaza and Washington Union. Staffed ticket offices are available at Alexandria and also at Washington Union although this latter ticket office takes some detective work to find, as it is located in the Grayline coach tours sales office on the concourse of the parking lot above Union station. Alexandria station is an Amtrak staffed station and the ticket office has the capability to sell you all the tickets you will need for a full day on VRE therefore I would suggest making your way to Alexandria with a pre planned list of moves and buying your tickets from the helpful staff at this station. Both Crystal City and LĺEnfant Plaza stations only have ticket machines and these do not accept credit cards issued outside North America. Indeed one regular VRE commuter on her evening return home wished to purchase a 10 ride ticket from one of the machines and it would not accept her card either. These temperamental machines are not user friendly in any way. VRE train crews are unable to issue tickets to passengers on board the train and it is not advisable to travel without a ticket. Penalties are high and no excuses will be accepted. Plain clothes transit police operate on VRE trains with the power to issue $150 on the spot fines for travelling without a ticket.

VRE has a mixed roster of motive power and rolling stock, some leased from other railroads. Of note are four ex Amtrak F40ĺs leased from Railworld Leasing, a company set up by former Wisconsin Central supremo Ed Burkhardt. Staple motive power for VRE are a batch of former freight engines rebuilt by Boise Locomotive in 1991 and designated RP39-2C along with two General Motors EMD F59PHI locomotives which have been leased from Sound Transit in Seattle. VRE operates eleven daily diagrams although the requirement for locomotives seems higher as during our visit on 28th October 2005 one train was worked by a pair and another was topĺnĺtailed.

Full roster details are as follows:- 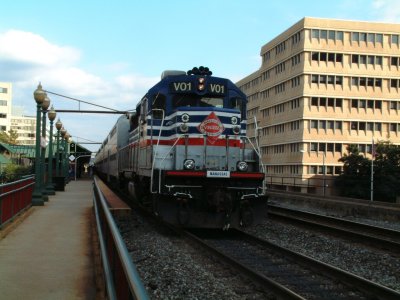 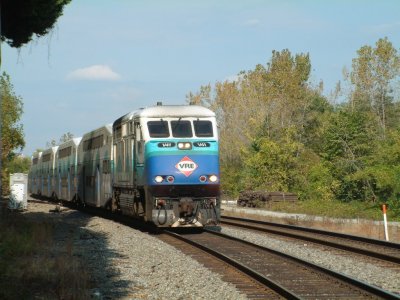