What no vegetables down the North East Corridor (except the wife and kids).

Despite getting to the airport 4 hours early we still were the last on the flight due to duff gen on the wrong gate number requiring a mad dash to make the 757.

Spin and win on a hot and humid day around both Boston North and South and the nearest link from the 5 star Airmiles Hotel (with Tierry Henry as Concierge) to any train was a mile stroll. (1 day clocked up nine miles). Too much slotting meant no food and bed until after 1am, having been up for 24 hours. 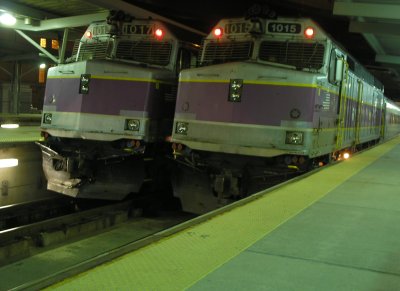 Main worry here was getting the troops up and out for 5.30 for the 1st train to New York. Thank goodness the Amtrak CafÚ was open so we could trough our way to the big apple. The weather in NY, NY was dire so Iĺm glad I left everybody else with 2 brollies while I looked on at Frank Sinatraĺs Hoboken. In between leaps I overstocked with a veg and rice chilli dish. 3 Miles from Newark Penn there was a dreadful signal failure which meant about 15 trains passed us from NY and left us festering for 45 minutes and I needed to be in NY to pick my clan up for the train back to Boston as I had all of the tickets on me! The mobile I had was useless and no contact was made on the train crewĺs mobile either. After my nerves of steel were bent I caught the last train into NY Penn to the announcement Ĺwould Steve Kemp please report to the Amtrak info officeĺ. The Guys were very relieved to see me appear (the overnight was flagged thank goodness).

I must admit my main concern was meeting in such a vast station with only ten minutes to spare. As luck would have it the train to Boston was the usual 30 mins late and we stood where I saw people ascending the staircase so I got the gen that 178 was off platform 7, so we were the first aboard. Arrived back at 12.30, so I sent them back in a taxi to cane in some doss. A madman was let loose in New York as we left, he shot at a number of people killing 1 and wounding a few others (he didnĺt like red cars ľ good job it wasnĺt yellow taxis!) 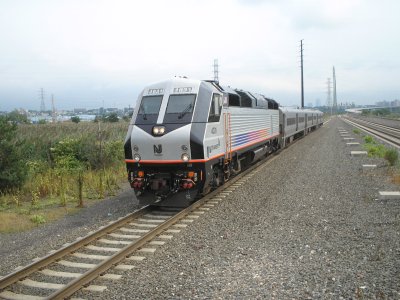 Early start for me for some more scratches picking the others up from the hotel whilst trying to break my shin on a glass table. Ice packed for 2 hours for the 12.05 to Portland with a glorious day weather wise and ice creams and veg soup all around. I scratched in the Thomas Tank and diesel Narrow Gauge whilst the others shopped. Karen reckoned we would be ok on the 18.15 bus for the 18.40 departure. The bus arrived 10 minus late and then the driver carelessly chatted and stopped at green traffic lights meaning we had an easy 30 second connection for the last train back to Boston.

We then had an evening photo session at Boston in the dark as it was a lovely clear evening. 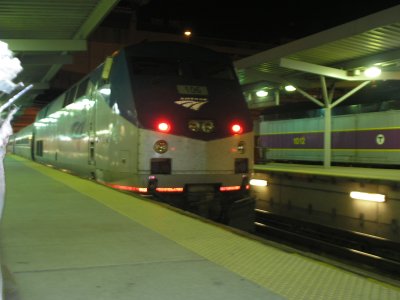 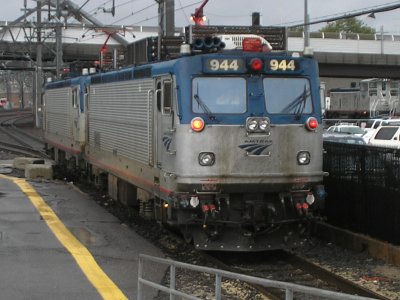 The weather was meant to be dodgy today so I decided to herd the family around 1st then leap to book the 12.00 to Springfield until I discovered it was a bus, the station Bert was finished when I read out the alternative move, him offering me a job for the day! The weather from Providence to New Haven was appalling about 3 inches of rain fell in a few hours. The Station at New Haven is well worth a view as there is a load of ĹOĺ gauge locoĺs and stock strung out across the benches in the waiting hall.
An egg sandwich was allocated between moves. I accidentally slotted in some green tea, which was hell fire on, Amtrak 194. Later I slotted in some more veg soup at the hotel.

The weather was great for the early morning leaps and a free boat trip; the bread rolls from the evening soup move were consumed during the rush hour.
I got a red card at South Station from the station manager for taking photos and not sticking to the concourse, which is difficult when you need to get the loco number at the far end! Managed to not get locked up as I had scratched the ĹWesternsĺ by now.
I then had a veg only lunch at the Mall and leapt for more newies at North Station which produced 1000, 1001, 1002 & 1004 so glad I avoided the Taxi and ice cream move.

The plane gates were switched again but we got the gen this time.

116 lines in the book and fun with tickets were had over the 5 days. The ticket inspectors accepted some very suspect tickets with wry smiles and they forgot to date the Amtrak passes! Enjoyed the Air-con and decent CafÚ Cars. It was very noticeable how the people were so much friendlier than NY. Didnĺt like having to use the Am/Pm garb when booking trains.

I hardly spent any money on food or anything so I used this to bribe Mrs Kemp on a daily basis! 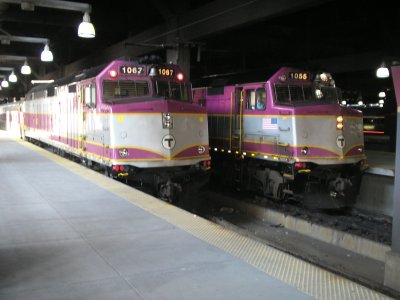