One of Amtrak's endangered species the 1993 built DASH8-P40B has declined dramatically over the last 12 months.
Various sources are quoting that 11 of the class are allocated to work Amtrak's Auto Train between Lorton and Sanford.
Use on Amtrak services in New York State and New England appears to be very rare with most services now worked by Amtrak DASH9-P42B engines.
Noted on the last visit were the following:- 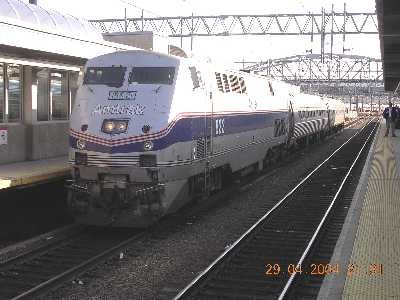 Amtrak DASH8-P40B loco 823 waits to depart New Haven with the 17.15 shuttle to Springfield.