Chicago has one of the most comprehensive commuter rail networks in North America. (go to www.metrarail.com ) Operating on 11 routes from 4 main stations Metra carries some 250,000 passengers on a weekday. Not all routes operate all day and some have no service at weekend. Below are details of what you will find in Chicago and a network description. All observations were made from 22nd October 2005 until 26th October 2005.

For a very comprehensive view of public transport in Chicago go to www.hometown.aol.com/chirailfan . This is the website of Bill Vandervoort and it gives probably the best overview of a cities transit system that I have ever come across.

3 routes are operated by Union Pacific Railroad from Chicago Ogilvie Transportation Center (OTC).
These are the UP North line to Waukegan, Illinois with occasional trains continuing to Kenosha, Wisconsin.
The UP North West route provides all day service to Harvard, Illinois with peak hour service on a branch to McHenry, Illinois.
The UP West line has recently (January 23rd 2006) been extended from it’s terminus at Geneva, Illinois on to Elburn, Illinois giving service over an extra 8 miles of previously freight only railroad.
This route is also a busy freight route with Union Pacific freight trains heading to and from Proviso yard.
Best places to see and photograph freight are the stations to the West of Elmhurst.
A new Metra yard has been built at Elburn to replace the yard which has been in use at West Chicago.
It is almost impossible to offer any meaningful locomotive diagrams as there appears to be no set workings.
Locomotives are exchanged on arrival in Chicago depending on fuelling and maintenance requirements.
Of note were 4 sets of locomotives and stock stabled at Barrington over the weekend.
These seemed to be in place for the Monday morning peak services and were expected to work trains 612 6.27 Barrington to OTC, 618 7.11 Arlington Park to OTC, 626 7.27 Barrington to OTC and 628 7.42 Barrington to OTC.
Once the morning peak is over locomotive convoys can be seen running from OTC to the UP/Metra depot at Western Avenue. 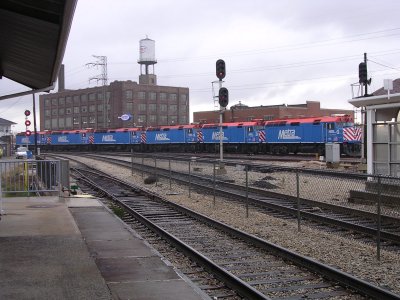 A 6 engine convoy makes it’s way onto the UP/Metra depot at Western Avenue after the morning peak on Monday 24th October 2005. This photograph was taken from the Milwaukee line platforms at Western Avenue, an excellent vantage point to watch the comings and goings of Metra and Amtrak trains from OTC and Union stations in Chicago.

Motive power for the Union Pacific Railroad routes are the General Motors EMD F40PH-2 locomotives in the number series 125 to 180. Locomotive 124 was noted on the 25th October 2005 running onto the Union Pacific/Metra depot at Western Avenue and may have been added to the UP lines roster. 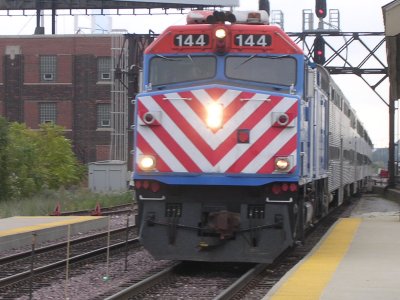 Six routes operate from Chicago’s Union station. Metra operates 7 day service from Union station North Concourse on the Milwaukee North line to Fox Lake and the Milwaukee West line to Big Timber Road. The weekday only North Central Service to Antioch also operates from the North Concourse. Metra also operates 2 routes from the South Concourse at Union station, these being the weekday only South West Service to Orland Park 179th Street, with peak hour extensions to Manhattan operating from 30th January 2006, and the peak hour only service to Joliet on the Heritage Corridor. Alongside the South West and Heritage operations Burlington Northern Santa Fe operate 7 day service along the route to Aurora, Illinois also from the South Concourse of Union station.

The Metra depot for Milwaukee Lines and North Central service is at Western Avenue 3 miles northwest of Union station. The station here forms an excellent vantage point from which to watch operations as you can also see movements to and from the UP/Metra depot situated opposite the station (the majority of this depot being hidden by a high banking). Amtrak’s Hiawatha service to Milwaukee also passes through Western Avenue using the Milwaukee North route as far as Rondout where it then takes the Canadian Pacific route on to Milwaukee. Amtrak’s daily Empire Builder long distance service to Portland and Seattle also passes through Western Avenue.

The Milwaukee North route to Fox Lake is predominantly passenger although a local trip freight works along the route during the afternoon. On Wednesday 26th October a Canadian Pacific locomotive was seen in the private siding next to Healy station. 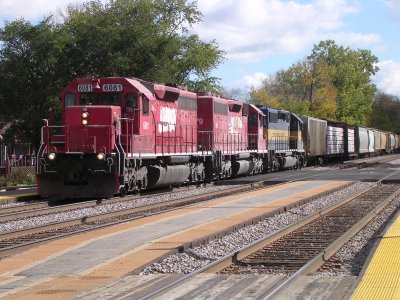 The North Central Service to Antioch runs over Metra tracks as far as River Grove where the route then accesses the Canadian National, former Wisconsin Central line. The flat crossing at Tower B-12 gives Canadian National trains access to the Indiana Harbour Belt route bypassing Chicago. From 30th January 2006 the North Central Service has been expanded to 20 trains per day although this is still weekdays only.

It is impossible to offer any meaningful diagrams as there seemed to be no pattern to locomotive workings once trains arrived in Chicago, outside the peaks. Almost every locomotive was either detached from it’s rake of stock and moved light to Western Avenue depot or the whole train of loco and stock was swapped with a fresh set from the depot. 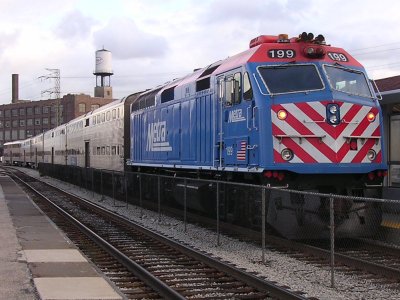 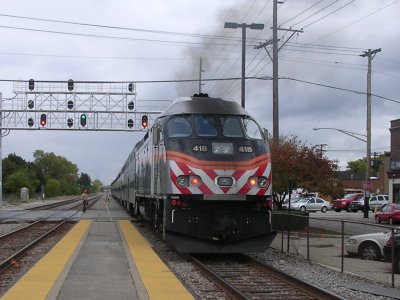 Metra South West Service operates to Orland Park 179th Street and from 30th January 2006 2 morning services have started from Manhatten and 2 evening services have terminated there. This route passes the Norfolk Southern Landers Yard with Wrightwood station providing a perfect viewing platform for operations at Landers as it is sited opposite the yard area. The rest of the route is still being developed with new property being built either side of the line the further South West you travel.

The Heritage Corridor is a purely peak hour operation with 3 morning inbound trains from Joliet to Chicago Union with 3 evening returns. This route also hosts Amtrak trains with the daily “Ann Rutledge” to St. Louis and Kansas City, and the daily “State House” to St. Louis calling at both Summit and Joliet stations and the long distance “Texas Eagle” calling at Joliet.

Burlington Northern Santa Fe Railway operate service to Aurora, Illinois on behalf of Metra. This route passes the BNSF yard at Willow Springs and offers the unusual opportunity to watch the passing of trains from inside the Aurora Roundhouse which has become a brewpub. Amtrak operates the daily “Illinois Zephyr” between Chicago and Quincy along this route as well as the long distance “California Zephyr” to Oakland, California and the “Southwest Chief” to Los Angeles.

Rostered motive power on these routes is as follows:-
Heritage Corridor and South West Service share GM F40PH-2 locomotives 113, 116 to 119 and 181 to 184, the latter 4 engines also being available to BNSF for short turns on the Aurora route.
The BNSF route to Aurora uses GM F40PHM-2 locomotives with 185 to 201 being rostered and the first batch of MPI MP36PHS-3S locos from 402 to 407.
As noted earlier GM F40PHM-2 loco no.199 was on Milwaukee lines service and may have replaced loco no. 211. 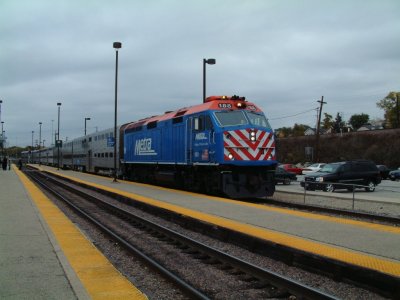 LaSalle Street station is the main Chicago station for Metra Rock Island line operations. The Rock Island line has two routes from Chicago to Joliet. The “Main” line sees predominantly peak hour only service via Washington Heights whilst the “Suburban” line has all day service via Beverly Hills. Both routes join back together at Blue Island Vermont Street, the junction being just to the south of the Blue Island Vermont Street station. The “Suburban” line is something of an enigma in heavy rail operations as stations are spaced at approximately half mile intervals over 5 miles. Trains run at approximately 20 minute intervals during the morning and evening peaks and this gives the prospect of being able to walk back to the station you started from to catch your next train. Metra has a work train yard at Blue Island where two of Metra’s switchers can be seen. In total there are 22 stations on the Rock Island line between Chicago LaSalle Street and Joliet via the “Suburban” route with all off peak trains making all stations stops. 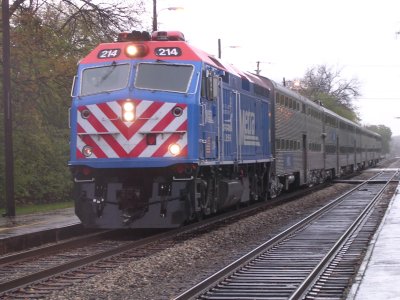 
Metra Electric services operate from Chicago’s Millennium Station on three routes to 93rd South Chicago, Blue Island Vermont Street and University Park. Metra Electric services are operated exclusively by Metra’s double deck electric multiple unit’s. Metra Electric shares part of the route from Millennium station with the Northern Indiana South Shore Commuter service to South Bend Airport. South Shore trains take their own route at Kensington station and it should be noted that the South Shore route through Michigan City still provides one of the few street running sections of railroad in North America. It is likely that funding will be provided to make this style of operation history in a few years time as the Transit Agency pays for the parallel freight route to be electrified and a new South Shore/Amtrak interchange station is built at Michigan City.

All information provided here is from observations made during the period October 22nd 2005 to October 26th 2005. Details are subject to change as the rail schedules for all Chicago Metra services have been updated and recast since January 30th. This has been to facilitate introduction of new and expanded rail services bringing better service to the citizens of the Chicago Metropolitan area. I recommend that every railfan takes time to travel on what is, in my opinion, one of the great rail systems of the world.